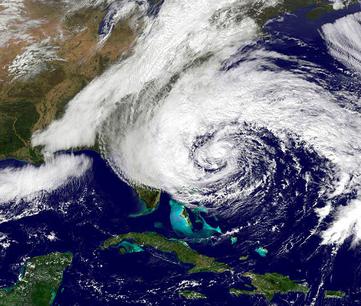 Recently I wrote at Slate Magazine about Superstorm Sandy as she barreled into Maryland. It was 10 am and my editor  just asked me to write about whether Sandy’s enormous size was related to climate change. Or, should we assume all storms have a global warming component because climate change has altered the playing field?

Lights flickered and sirens blared in my neighborhood. I knew it was only a matter of time before I lost power. So the interviews happened in quick succession. I first reached MIT’s Kerry Emmanuel, who explained to me that Sandy was a hybrid storm–a rare combination of enormous hurricane and powerful winter storm. From my story:

Emmanuel: It is correct to say that in no individual [weather] event can you really make an attribution to anything, whether it is climate change or El Nino or your grandmother had her tooth pulled this morning. You just can’t do it for a single event. It is just the nature of the game. Now, Sandy is an example of what we call a hybrid storm. It works on some of the same principles as the way hurricanes work but it also works on the same principles as winter storms work. Hurricanes and winter storms are powered by completely different energy sources. The hurricane is powered by the evaporation of sea water. Winter storms are powered by horizontal temperature contrasts in the atmosphere. So hybrid storms are able to tap into both energy sources. That’s why they can be so powerful.

An hour later I reached NCAR climate scientist Kevin Trenberth in Colorado. He explained that a few inches of sea level rise had the potential to make Sandy even more catastrophic. Most scientists seem to be reluctant to tie a single storm to climate change, but sea level rise is much more clearly climate-related and disastrous. It doesn’t take much for an extreme event with a little bit of extra sea level to overtop coastal defenses. I asked Trenberth: What should we expect with Sandy?

Trenberth: You have this picture sometimes that sea level is going up at this slow rate of 3 millimeters per year. You stand there and you watch, and finally it gets up to your toes or it gets up to your ankles. You think finally, I better do something about this. That’s not the way it works. Sea level-rise happens episodically. One minute it looks benign and then a week later suddenly a storm or hurricane comes along like Sandy, and there are major waves, 20-foot waves, and major storm surge, and tremendous damage occurs.

He went on to say:

Even if the storm just happened to do exactly the same things it’s doing anyway, the fact that sea level went up 6 inches last century, and that sea level is somewhat higher now than it has been at any time in recent history, means that all of the coastal regions are experiencing new levels of pounding and erosion. I expect there could be some quite surprising events along some of the coast as a result of that.

In my story headlined Hybrid Hell published at Slate Magazine (their Science and Health section is excellent, check it out!), you can read the complete interviews that I tapped out on my keyboard as water flooded my basement and tree limbs fell around my house.

This site uses Akismet to reduce spam. Learn how your comment data is processed.